GLENDALE, Ore. - An Azalea man eluded deputies on Tuesday afternoon and now the Sheriff's Office is asking the public for tips as to his whereabouts.

On Tuesday, October 27, 2020, at 3:55 pm, a deputy attempted to stop a blue 2002 Honda Accord when the driver, 47-year-old John Curtis Williams of Azalea, accelerated and lead deputies on a seven mile pursuit.

Curtis lost control of the vehicle and spun out on a dirt road in the 1000-block of McCullough Creek Road. After the vehicle came to rest, Curtis fled from the vehicle on foot and was able to get away.

Deputies are now asking for tips from the public as to Curtis' whereabouts. Anyone with information is asked to contact the Douglas County Sheriff's Office at (541) 440-4471 referencing case number 20-5000.

Curtis is described as 5'10'', 218 lbs, black hair and brown eyes. He has an approximate 2 inch scar below his left eye, a tattoo on his left arm of a cross with the word "FAITH" and a tattoo on the web of his left hand with the letters "JC". 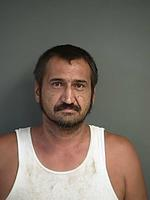