On Thursday, October 22, 2020, the Sheriff's Office took a report that hidden cameras had been discovered in the bedroom of a minor female known to the suspect, 48-year-old Robert Wayne Roady of Roseburg.

Detectives conducted interviews and executed a search warrant at Roady's residence in the 2000-block of Linnell Avenue. During the search warrant, detectives found evidence pertaining to the investigation.

Roady, a Police Officer with the Roseburg Veteran's Administration, was contacted and interviewed by detectives at the Sheriff's Office. Roady admitted to placing the cameras in the room of a 14-year-old female for sexual purposes. Through the investigation, two additional minor victims were identified and additional evidence was discovered.

Roady was lodged at the Douglas County Jail on nine (9) counts of Invasion of Personal Privacy in the First Degree (Class C Felony). Additional charges are being considered pending further investigation.

Detectives are continuing their investigation at this time. Anyone with information is asked to contact the Detectives Division at (541) 440-4458, referencing case number 20-4920. 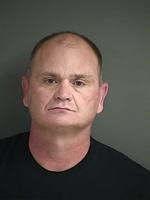