Medford Man Arrested for Burglary and Other Charges

GLIDE, Ore. - Two Glide women were awakened Wednesday morning to find an intruder in their home. They confronted the intruder who left before calling police.

Dispatchers received a call around 6:00 am on Wednesday, October 21, 2020 of an intruder inside of a home in the 1900-block of Glide Loop Drive. The caller stated she had woken up to find an unknown adult male in her kitchen. She and another adult female in the home confronted the male who left.

Deputies along with Oregon State Police Troopers responded and were able to identify the male from a photograph taken by the homeowner as 30-year-old Michael Lowell Gilligan of Medford.

While searching the area, deputies located Gilligan walking on North Umpqua Highway with a backpack. They observed him enter a vehicle owned by Glide School District and look through several compartments. Deputies detained Gilligan and learned he had entered another vehicle in the area and stolen the backpack he was wearing.

Gilligan was arrested and lodged at the Douglas County Jail on the following charges:

Deputies state Gilligan was also in possession of a gallon of milk and a can of beets, which are suspected of being stolen. Anyone with information is asked to contact the Douglas County Sheriff's Office at 541-440-4471 referencing case number 20-4875. 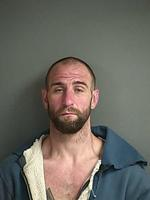