WHITE CITY,OR–On 10-22-20 at 1001 hours, dispatch received a report of an assault with a weapon at 8005 Gladstone Ave., White City, Oregon. Deputies found the victim deceased at the scene and learned the suspect had fled on foot.

The investigation has determined that the victim was stabbed with a knife by a male who frequented  the address. The victim was a resident at the house.

The suspect was originally contacted approximately 90 minutes after the stabbing in the 2600 block of Falcon St in White City. He was detained on a Parole Violation on an Original charge of Unlawful Use of a Weapon and lodged at Jackson County Jail.

The suspect is identified as Hector Cruz Orozco, birth date 08/24/1996  who has multiple listed addresses in  White City.

On 102320 additional charges were added on Orozco. He is now charged with Murder, Animal Abuse I and Tampering With Evidence. The animal abuse stems from an earlier incident involving the suspect killing a dog. 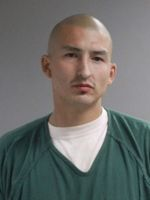