MEDFORD, Ore.—U.S. Attorney Billy J. Williams announced today that an Ontario, Oregon resident, and a Weiser, Idaho resident have been charged with interstate trafficking of methamphetamines and other drugs.

Alma Lorena Pacheco Ortiz, 52, and Victor Gomez Casa 26, have been charged by criminal complaint with possession of controlled substances with intent to distribute, and Pacheco was also charged with possession of a firearm by a person unlawfully in the United States.

“Rural communities across Oregon have been ravaged by the effects of methamphetamine addiction” said U.S. Attorney Billy J. Williams “We cannot succeed in breaking the cycle of addiction and affliction in these communities when individuals like the defendants, motivated by greed, continue to provide a steady supply of poison. We are proud of the collaborative efforts to disrupt this long term drug trafficking enterprise”

“Communities are struggling to reduce or eliminate the physical and mental damage caused to individuals and communities by illicit drug addiction,” said Steven Romero, Ontario, Oregon Chief of Police.  “Area law enforcement continue to use a ‘force multiplier’ approach for disrupting or dismantling international, multi-state and local drug trafficking and money laundering organizations.  We’re proud work together with our law enforcement partners to make our communities safer.”

“I applaud the work of Federal, state, and local law enforcement in this effort,” said Malheur County, Oregon Sheriff Brian Wolfe.  “People are being held accountable for serious illegal activity which in turn makes our communities safer.”

“Oregon State Police Troopers work diligently to observe signs of criminal activity during every traffic stop,” said Captain Tim Fox. “As part of this coordinated effort, our OSP Troopers engaged these observation skills which proved fruitful in pulling a significant amount of drugs off the streets.”

According to court documents, on October 25, 2020, law enforcement conducted a coordinated traffic stop on a 2015 Chevrolet Tahoe with Idaho plates. The driver of the car was Pacheco, and the passenger was the registered owner Victor Gomez Casa.

A search of the vehicle led to the discovery of a mechanically actuated trap located under the rear seat of the vehicle. Law enforcement was able to activate the trap, opening the storage compartment which revealed approximately 40 pounds of methamphetamine and a kilo of heroin. (PHOTO)

Pacheco admitted traveling to California to obtain drugs, which she had been transporting and distributing in Eastern Oregon for several years.

Pacheco and Casa are expected to make initial appearance in federal court in the near future.

The Oregon State Police, ATF, Malheur County Sheriff’s office, and Ontario Police Department investigated this case. It is being prosecuted by Marco Boccato, Assistant U.S. Attorney for the District of Oregon.

A criminal complaint is only an accusation of a crime, and a defendants are presumed innocent unless and until proven guilty. 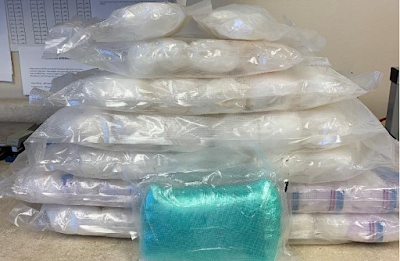