On November 26, 2020, at 6:41 a.m., Washington County Sheriff’s Office deputies responded to a call of a male breaking into a car in the 12800 block of NW Creekview Drive in the community of Cedar Mill. A resident heard his car alarm go off and saw a male inside his vehicle. While he confronted the male suspect, another family member called 911. The resident kept the suspect on scene until deputies arrived.

The investigation revealed that the male suspect had not only entered several vehicles, but had also been inside the residence and the garage. While inside the home, the male used the restroom and helped himself to food that the family was going to prepare for their Thanksgiving breakfast.The suspect also loaded his pockets with various items he stole from the vehicles and the home.

Detectives from the Property Crimes Unit responded to the scene to assist with the investigation. Investigators have already linked the suspect to at least one additional case.

Additional charges may be forthcoming as the investigation continues.

Anyone with information on this investigation is asked to call deputies at 503-629-0111. 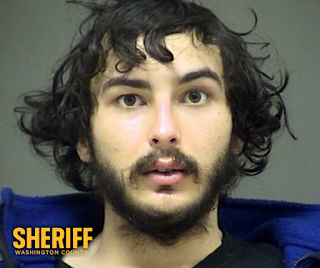