On November 21, 2020 at 10:45 a.m., the Lane County Sheriff's Office received a report of a burglary at the Creswell Public Works facility off Highway 99 in Creswell. The burglary was discovered by a Creswell Public Works employee when they drove by and noticed the shop bay doors were open when they should have been closed. A blue, 1992 Dodge D20 Cummins truck with Oregon license plate E228034 was stolen along with several power tools.  A photo of a similar truck is attached.  The photo is NOT of the actual truck.

The Lane County Sheriff's Office is asking anyone with information about this incident or the location of the stolen items or truck to call 541-682-4150 then press 1 and reference case # 20-7982. 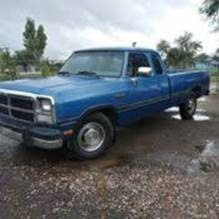