A Portland Police sergeant suffered minor injuries after his vehicle was rear-ended by a driver who ran off and has not yet been located.On Saturday, November 14, 2020 at 11:40p.m., a North Precinct sergeant in a fully marked Portland Police Ford utility vehicle was stopped at a red light, southbound on North Vancouver Avenue at North Fremont Street. A suspect driver in a Chevrolet Impala rear ended the sergeant's car (photos). The sergeant was able to notify dispatch via radio, then updated that he was seeing the driver running from the crash.Additional units responded and searched for the suspect, but he has not been located. A female passenger in the Impala was uninjured. The driver was described as a heavyset adult black male wearing a red hooded sweatshirt.The sergeant was transported by police vehicle to a hospital, treated, and released.The investigation is continuing. 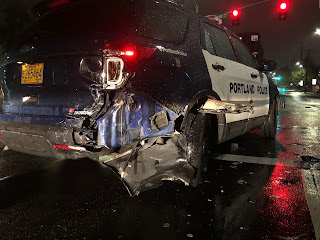 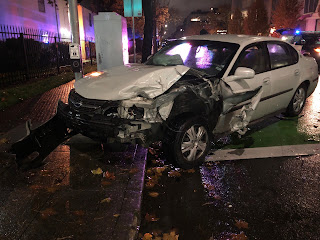