On November 22, 2020, at approximately 2:40 am, deputies with the Deschutes County Sheriff’s Office were dispatched to a reported single vehicle injury crash in the 3060 Block of SW Helmholtz Way in Redmond.  A resident in the area had called into 911 dispatch after hearing the crash and then going outside to check on the vehicle occupant.  The vehicle had also struck a power pole along the roadway shoulder, causing the top of the pole to break off and fall onto Helmholtz Way.

An initial investigation at the scene determined Van Alstine was driving a white 2004 GMC Yukon southbound on SW Helmholtz Way when she failed to negotiate a curve and left the roadway.  The Yukon rolled multiple times during the crash, throwing Van Alstine from the vehicle.  Speed and alcohol are being investigated as contributing factors in this crash.  Investigators do not believe she was wearing a seatbelt at the time of the crash.

SW Helmholtz Way was closed or reduced to one lane of travel for nearly 8 hours, while the pole and cable line were cleared from the roadway.  Deputies would like to thank the Oregon State Police and Deschutes County Road Department for their assistance at the scene. 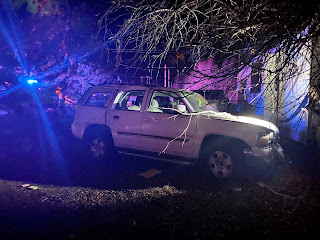