REEDSPORT, Ore. - A 54-year-old Florence woman is in the Douglas County Jail after resisting arrest and assaulting a deputy Sunday afternoon.

Shortly before 3:00 on Sunday, November 29, 2020, a deputy made a traffic stop on a Chrysler PT Cruiser. During the course of the traffic stop, the deputy learned the female passenger, Holly Lynne Sigmund, had a warrant for her arrest. Sigmund exited the vehicle and became confrontational. When the deputy attempted to place her into handcuffs, Sigmund began resisting arrest. She retrieved a can of pork and beans and threatened to throw it at him. The deputy attempted to use his TASER device but was ineffective at which point Sigmund threw the can at the deputy's head and missed him.

The deputy then attempted to physically take Sigmund into custody. She continued to resist and managed to kick the deputy twice in the ribs. The deputy ultimately took her into custody. During the struggle, the deputy sustained scratch marks to his arms, forehead and right ear. Sigmund was transported to the Douglas County Jail where she was lodged on the following charges:

The deputy received treatment for minor injuries and is expected to return on his next shift. 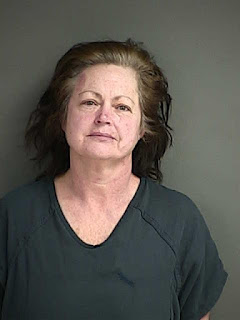