An officer from the Cottage Grove Police Department located and attempted to stop the CMV.  The CMV drove onto the shoulder and continued northbound in an attempt to elude the officer.

Near milepost 173 the CMV (2020 International), operated by Tylor Stafford (53) of Shelbyville, Texas, crashed into a southbound CMV (2019 Volvo) operated by Daryl Rickman (53) of Portland, Oregon.

Stafford's CMV (2020 International) then crashed into the concrete barrier and burst into flames.

Stafford attempted to run on foot however he was captured by an officer from the Cottage Grove Police Department.

Stafford was arrested for multiple charges including DUII, Reckless Driving, and Reckless Endangering.

Stafford nor Rickman were injured. 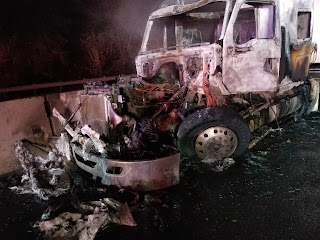