On Monday, December 14, 2020, at approximately 7:03 a.m., Multnomah County Sheriff’s patrol deputies responded to a report of a two-vehicle crash near NE Glisan St. & West Ponds Dr. When deputies arrived, they found a Volkswagen Jetta and a Subaru Impreza with substantial damage. Both drivers were pronounced deceased on scene.

Because of the severity of the crash, the East County Vehicular Crimes Team (ECVCT) responded to lead the investigation. ECVCT investigators determined the cars were traveling in opposite directions on NE Glisan Ave. when the driver of the Volkswagen crossed the center line into oncoming traffic, colliding with the Subaru.

They were the only occupants in each of their vehicles. The investigation is ongoing, and no further comment can be made at this time.

This is the 30th ECVCT activation and 25th and 26th deaths on roadways in these areas this year. 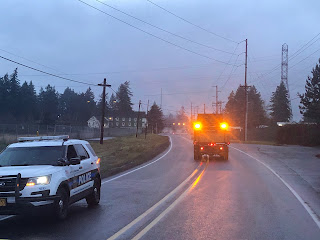