On December 21, 2020, while dealing with individuals that had gained entry into the Oregon State Capitol, OSP Troopers where sprayed with some kind of chemical agent on 2 different occasions.

At 8:30 A.M., when protesters entered that capitol building, at least one of the protesters used chemical agents on the police.  That person is still outstanding.  OSP used inert pepper ball, while dealing with these protestors.

At 10:30 A.M., when there were enough resources available between OSP & Salem Police Department, they started to push the crowd out of the building, when another individual used bear spray against police officers.  That person, who has been identified as Ryan Lyles (41) (see photo), has been taken into custody.  He is being lodged at Marion County Jail on multiple charges including trespassing and assaulting a police officer.

OSP has not deployed any CS gas.

The Oregon State Police encourage people to exercise their first amendment rights, but it must be lawfully.  Please, discontinue the acts of vandalism or destruction of property.  If you commit a crime you will be subject to arrest. 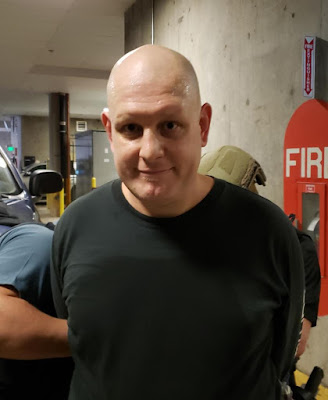