On Saturday, January 23, 2021 about 3:17 PM an employee at Cash Connection located at 1031 NE 5th Street in Bend, called 9-1-1 to report a suspicious male had just attempted to rob the store.  The caller told police that a suspicious male entered the store, approached the cashier and asked for money from the register.  The male left the store without any money.  The cashier provided police with a partial license plate and a full description of the suspect and vehicle (a silver Dodge van).  Based on information obtained during the investigation officers identified Levi Church as a person of interest.  No weapons were displayed or seen during this incident.

On Saturday, January 23, 2021 about 4:23 PM a male clerk from the Expressway Market & Gas Station located at 1450 SE Reed Market Road in Bend called 9-1-1 to report a robbery had just occurred at the store.  The clerk reported a male, who he knew as Levi Church, had just robbed them and left the store with an undisclosed amount of money.  No weapons were displayed by the suspect or seen by the witnesses during this incident.

Police believed that the two incidents were related and sent out an attempt to locate to all neighboring law enforcement agencies in Central Oregon.

At 4:56 PM a Deschutes County Sheriff's Deputy spotted Church’s van near the Circle K in Sunriver, Oregon (located at 56896 Venture Lane).  The Deschutes County Sheriff’s Deputy, with the assistance of the Sunriver Police Department, contacted Church outside the vehicle and he was arrested.  A search of Church and the van revealed US currency believed to be profits from the previous robbery.  No weapons were located on Church or in the vehicle. 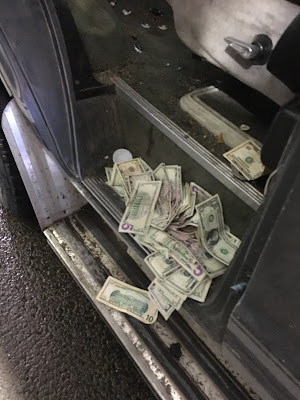