On 01-11-2021 at around 3:15pm, Detectives with the Rogue Area Drug Enforcement (RADE) Team, with the assistance of the Oregon State Police SW Region Marijuana Team, Oregon State Police and Grants Pass DPS Narcotic Detection K9, arrested Migueal Angel Jauregui-Hernandez. Jauregui-Hernandez is part of a drug trafficking organization (DTO) who was bringing large quantities of methamphetamine into Josephine County via California.

The investigation into this DTO has been ongoing by RADE for several months. Jauregui-Hernandez was stopped after being followed coming into Oregon from California. During the stop, GPDPS's Narcotic detection K9, Match, alerted to the vehicle having illegal controlled substances. During a subsequent search of the vehicle, detectives located 15.9 pounds of crystal methamphetamine.

Jauregui-Hernandez was taken into custody and lodged in the Jackson County Jail. DTO's are described as being complex organizations with highly defined command-and-control structures that produce, transport, and/or distribute large quantity of illegal controlled substances; in this case, methamphetamine. Anyone with information or questions can contact Det. Sgt. Doni Hamilton with RADE at 541-450-6370 or dhamilton@grantspassoregon.gov 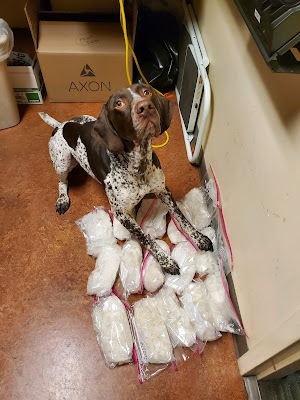