On Tuesday, January 4th, 2021 around 11:10 AM, Roseburg Police, Roseburg Fire and other EMS personnel responded to a single vehicle accident in the 1900 block of Airport Road in Roseburg.

Witnesses said a black 1990 Toyota pickup, towing a flatbed trailer with another Toyota pickup on it, was pulling onto Airport Road from a side street.  Witnesses said the pickup accelerated suddenly, going straight across Airport Road, into the ditch and across the railroad tracks before stopping short of the airport fencing as the trailer got stuck on the railroad tracks.  Ambulance crews provided emergency care to the driver, a 49 year old male of Roseburg.  The male was transported to Mercy Hospital via ambulance, and was later pronounced deceased.

There was no property damage and the vehicle was removed by Roseburg Towing. 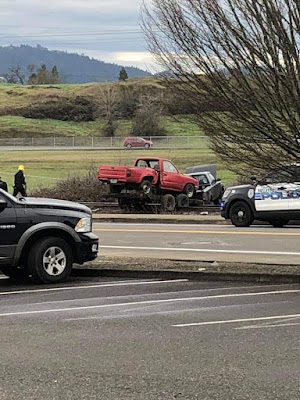