Clackamas County Sheriff's Office detectives are seeking tips after locating skeletal human remains in a remote wilderness area southeast of Molalla. The case is being investigated as a homicide.

On Friday, Jan. 8, a Weyerhauser crew working in a wilderness area southeast of Molalla stumbled across human remains, including a partial human skull. The remains were found at a work site where the crew was planting trees, in a steep ravine off a private logging road.

Scraps of clothing found in the area suggest the remains may have been there for some time. The remains predate the wildfires that swept through that area last September.

Sheriff's Office deputies, detectives, and forensic specialists responded to the scene, along with the Clackamas County Medical Examiner's Office and Oregon State Police Crime Scene Investigators (CSI). Because of the steep 45-degree incline where the bones were found, Clackamas County Search and Rescue (CSAR) volunteers also responded to the scene to run rope lines down the hill.

Working together, search teams and Sheriff's Office investigators spent several days combing over and photographing the scene, recovering and documenting all available remains and any other possible evidence at the site.

Among the additional items recovered at the site: a white low-top style canvas athletic shoe, size 9.5, and a dark-gray metal ring with a squared red stone.

The on-site investigation concluded last week. Photos from the scene are attached. B-roll video of CSAR descending the hillside is here.

More details on the remains will follow as the investigation unfolds.

At this writing, detectives are investigating the case as a homicide.

TIPS SOUGHT: Anyone with information on the human remains found southeast of Molalla is urged to contact the Sheriff's Office Tip Line -- by phone at 503-723-4949 or by using the online email form at https://www.clackamas.us/sheriff/tip . Please reference CCSO Case # 21-000584. 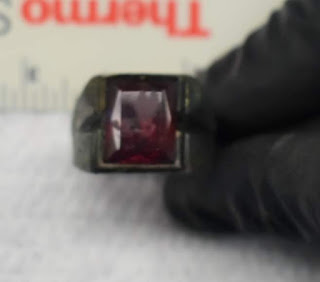 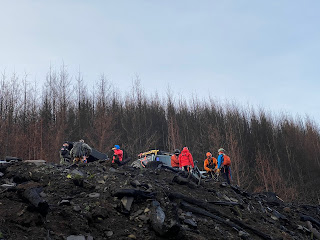 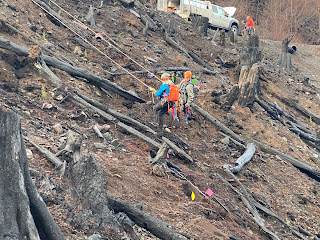