On January 28, 2021 at 1:53am, a Deputy with the Josephine County Sheriff’s Office stopped to assist with what was believed to be a stranded motorist near the intersection of Riverbanks Road and Lower River Road. As the Deputy approached the vehicle, it left at a high rate of speed, spinning the tires and sliding sideways in the roadway.  With emergency lights activated, the Deputy attempted to stop the vehicle, however it continued east bound on Lower River Road towards Grants Pass at speeds up to 90 mph.  At this point, a vehicle pursuit was initiated.

Near the intersection of Lower River Road and Stewart Road, the suspect vehicle stopped in the middle of the road and the male driver reached out the driver window with a handgun and shot at the Deputy who was still seated in his vehicle.  The Deputy was not struck and the suspect vehicle fled at a high rate of speed continuing towards Grants Pass with the Deputy still in pursuit.  Two other Deputies from the Josephine County Sheriff’s Office joined the pursuit which ended at the intersection of Azalea Drive and Galice Road when the vehicle crashed into a guardrail.

The male driver was taken into custody without further incident.  The male driver and a female passenger were transported by ambulance to area hospitals to receive treatment for injuries sustained in the crash. 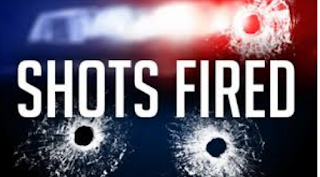