CORVALLIS, Ore. – The Benton County Sheriff’s Office (BCSO) arrested Eric Ryan Maxfield (34) of Albany, after pursuing him into Linn County in a stolen pickup truck, which he took from a hotel parking lot in the 900 Block of NW Garfield Avenue in Corvallis.

At approximately 4:00 PM on February 24, 2021, a call came into Dispatch from a man who observed his vehicle being stolen. He reported a male used a tool to start his white, 2001 Ford F350 diesel work truck and drove off, westbound on Garfield Avenue.

A marked BCSO Unit attempted to stop the stolen vehicle near Fillmore Avenue and Kings Boulevard in Corvallis after it was observed in the area by Corvallis Police Officers. The driver attempted to elude Deputies and continued east out of town by driving the wrong direction on Harrison Boulevard and across the bridge into Linn County. Another BCSO Deputy reacquired the vehicle on Highway 34 near Peoria Road and resumed pursuit.

The vehicle traveled through Albany, then returned to I-5 via Old Salem Road and headed the wrong direction up the off-ramp. The vehicle again drove northbound on the shoulder, against traffic, in the southbound lanes of I-5. BCSO Units temporarily discontinued pursuit and waited at the Milepost 237 Exit on I-5. The vehicle eventually changed direction and began traveling southbound again on I-5 at approximately Milepost 239.

Two BCSO Deputies successfully deployed spike strips and deflated both passenger side tires as the stolen vehicle passed them headed southbound at Milepost 237. The vehicle came to a stop on the shoulder approximately a mile south of that location after the deflated tires came apart. The driver and sole occupant, Eric Maxfield, exited the vehicle, complied with commands, and was taken into custody at approximately 4:42 PM. Maxfield was found to be in possession of more than an ounce of Methamphetamine and numerous altered keys used to steal cars.

Maxfield was transported to the Linn County Jail where he was lodged on a detainer by a Marion County Parole & Probation Officer. Maxfield was also charged with Unauthorized Use of a Vehicle, Possession of a Stolen Vehicle, Reckless Driving, Recklessly Endangering, Attempt to Elude, Unlawful Delivery of Methamphetamine, Unlawful Possession of Methamphetamine – Misdemeanor, and Possession of Burglary/Theft Tools. As of this time, Maxfield remains in jail in part due to the diligence and hard work of the Linn County District Attorney’s Office. 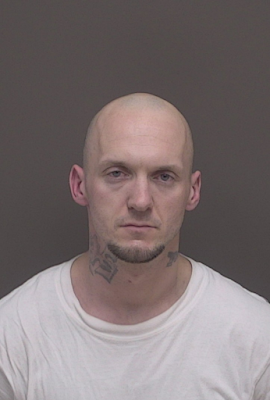