MAN ARRESTED FOR DISPLAYING A GUN DURING ROAD RAGE INCIDENT

On Tuesday, February 16, 2021, at 10:31 p.m., a Washington County Sheriff’s Office deputy was flagged down by a man near the 2900 block of E Baseline St. in Cornelius, Oregon. The man told the deputy another vehicle was driving recklessly, began tailgating him near the Hillsboro Police Station (located at 250 SE 10th Ave.), and said the driver eventually pointed a gun at him. The man told the deputy he had already called 9-1-1 and provided the California license plate of the vehicle he had seen driving recklessly.

Another deputy in the area heard the information from dispatch and spotted the vehicle that the suspect had been driving recklessly, a black 2016 Chevrolet Colorado, in the Cornelius Fred Meyer parking lot. Multiple deputies arrived to assist and take the driver, 23-year-old Bailey Michael Todd Reasoner of Vernonia, into custody without incident.

While searching the vehicle, deputies located two loaded handguns and a metal pipe, which they believed to be an explosive device. Deputies contacted Portland Police Bureau’s Explosive Disposal Unit (EDU) to ask for their assistance.

Mr. Reasoning was lodged in the Washington County Jail on multiple charges, including unlawful use of a weapon, unlawful possession of a firearm, menacing, and driving under the influence of intoxicants. Additional charges may be pending.

The following day (2/17/21), Portland Police EDU determined there were no explosive materials within the pipe. 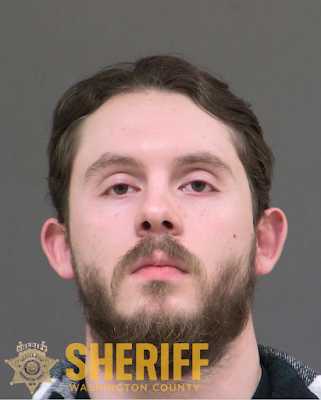