This search warrant was the end result of an investigation into Michael Allan Reigstad (56) of Corvallis, dealing methamphetamine to the local population of Corvallis. A search of the property resulted in over 130 grams of methamphetamine, over $3,000 US Currency, restricted weapons, drug packaging material, digital scales, and suspected stolen property.

Reigstad was also arrested on a Grand Jury Indictment Warrant for Unlawful Delivery of Methamphetamine from the last investigation/narcotics search warrant executed at the same residence in late 2019.

Reigstad was lodged at the Benton County Jail and remains with no bail amounts set.

The property owner, Ruby Fritzson (76) was present at the location and was again arrested for Frequenting a Place where Drugs are Used. Fritzson was issued a citation and released on scene.

Anyone with information concerning Reigstad (or any other drug dealers) and his criminal activities are encouraged to call the Benton County Sheriff’s Office and ask to speak with a Street Crimes Detective. Callers may also remain anonymous by calling the BCSO tipline at 541-753-8477. 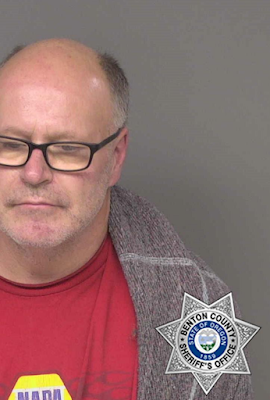