This afternoon at 1:30, Cornelius Firefighters were dispatched to a reported fire in the 500 block of N 4th Avenue, the business is Thunderbolt Racing Fuel and Summit Foods. Initial reports were that a fuel tank was on fire at a facility that makes ethanol racing fuel. Crews arrived minutes later to find heavy amounts of smoke and fire coming from the fuel processing and storage area of the property. A second alarm was immediately called for to bring in additional crews. Crews initially started to pull hose lines to begin extinguishment. But due to explosions and erratic fire conditions, incident command made the decision to pull all crews back to a safe distance. At this time, we worked with law enforcement to start evacuating local residents (approximately 80 homes) and businesses, as well as a busy Walmart.

Once crews were in a safe spot, incident commanders began created a strategy on evaluating the dangerous situation as well as the best way to extinguish the fire. Specialized resources like the regional Hazardous Materials(HAZMAT) Team and a airport foam truck were requested to the scene. A third alarm was also called for to bring even more additional firefighters to the scene.

Fire crews held a protective stance while the HAZMAT team assessed the scene and evaluated the hazardous chemicals that were on fire, and what would be the best way to extinguish the flames. It took several hours for crews to come up with a safe plan that covered all possible situations that could happen. Ultimately, a foam rescue truck from Portland Airport was used to spray a special agent to extinguish the ethanol fire. That extinguishing agent is called Purple K, and is bright purple (in photos).

Unfortunately, 3 other structures on the property were destroyed as well as several vehicles and delivery trucks. A cause to the fire is under investigation. A positive note to the incident is that no employees, civilians or emergency responders were injured during the incident.

A little after 7pm, five and a half hours after the fire started, the incident was deemed under control. Local residents were able to return home, and major roadways were opened back up.

Some local residents may be without natural gas as it was turned off to the area and utility crews are working to restore it. There will be firefighters on scene all night watching the scene and smoke might be seen, but there's currently no threat to the public. 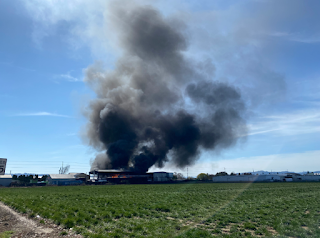 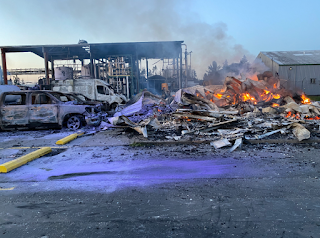 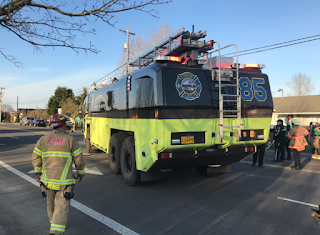 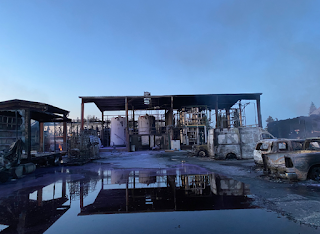 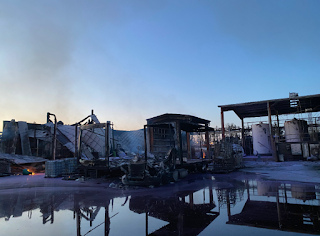