At approximately 12:20 a.m. on March 23rd, 2021, deputies were dispatched to the report of a fuel tanker involved in a roll-over crash in the 9500 block of Golf Club Road SE near Stayton.  When emergency crews arrived on scene, they located a 2019 Kenworth fuel truck and trailer belonging to Oregon Petroleum Transport Company overturned on the side of the roadway, leaking fuel.  The driver was not injured in the crash.

Deputies and fire crews remained on scene for several hours while the remaining fuel in the tanker and trailer were pumped out to another vehicle.  Prior to the crash, the vehicle was carrying approximately 11,400 gallons of fuel.  Initial estimates at the scene indicate as much as 2,300 gallons of fuel were spilled during the crash.

Investigators from the Marion County Multi-Agency Crash Team and the Marion County Weighmaster were called to the scene to investigate.  Interviews at the scene lead deputies to believe driver fatigue may have played a role in the crash.  No charging decision has been made at this time.

Golf Club Road will continue to remain closed to traffic until hazardous material cleanup crews are able to complete a safety assessment of the spill area, remove and replace contaminated soils and make any required repairs to the roadway. There is no current estimate for when the roadway will reopened to vehicle traffic. 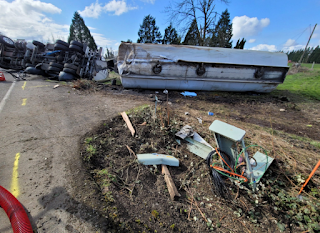