On March 30, 2021, at 9:20 pm, 9-1-1 dispatchers began receiving reports of a single vehicle crash in the 9000-block of Old Highway 99 South near Dillard. When deputies arrived on scene, they found a 2007 Toyota Tacoma in a ditch. The driver, 35 year-old Jesse Lee Gardner of Roseburg, had been traveling south on Old Highway 99, when he drifted off of the roadway and into a ditch coming to rest against a culvert.

Fire and EMS crews extricated a female passenger, 46 year-old Amber Taylor of Eugene, from the pickup and transported her to Mercy Medical Center where she was evaluated for her serious injuries. Gardner was also transported to Mercy Medical Center by ambulance where he was treated. Deputies conducted a follow up investigation and arrested Gardner for Driving Under the Influence of Intoxicants, Reckless Driving, Reckless Endangering and Assault. Due to his injuries and condition, deputies cited and released Gardner at the hospital. 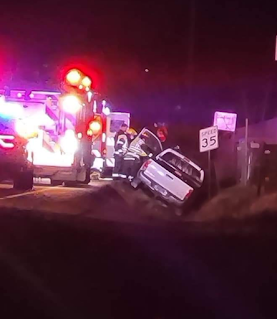