On 03/22/21, at 0327 hours, the Coos Bay Police Department dispatch center received several 911 calls reporting a vehicle crash.  One of the reporting parties stated the crashed vehicle was in their yard.  Medical personnel and law enforcement were immediately dispatched to the scene at 1180 Ocean Ct.

Just prior to the 911 calls, a Coos Bay Police Officer had observed a vehicle traveling eastbound on Ocean Blvd at a high rate of speed; however, the officer was traveling westbound and lost sight of the vehicle as he turned his patrol vehicle around. Officers were later able to determine that this was the same vehicle observed.

Officers arrived at the crash scene at approximately 0331 hours and located the vehicle laying on its roof in a yard.  The officers discovered the driver of the vehicle was trapped inside the vehicle and was badly injured.  The driver, later identified as Victor Chavez, of Coos Bay was unconscious and unresponsive.  Coos Bay Fire Department along with Bay Cities Ambulance also arrived on scene and begin assisting in the extraction of Chavez.  Once Chavez was freed from the car, he was transported to Bay Area Hospital by Bay Cities Ambulance with what appeared to be life threatening injuries.  The officers were also able to determine that the driver was the only occupant in the vehicle.

North Bend Police Department arrived on scene to assist Coos Bay Police Department with the crash investigation.  The crash scene revealed that there was significant property damage to several private properties as well as damage to a parked vehicle and a large boat.  A bag containing what appeared to be illegal narcotics was also located in Chavez’s vehicle.

Mast Bros Towing Company arrived on scene to assist in the removal of Chavez’s crashed car as well as the clean-up of the debris. 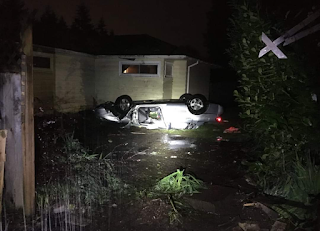