The victim in yesterday’s homicide on Hall Road in northern Lane County is 73-year-old Stephen Perry Bream of Junction City.

Travis William Crum was arrested yesterday evening and lodged in the Lane County Jail on murder charges. Crum is 52 years old and has no known address.

During the investigation of this homicide, Oregon State Troopers and Lane County Sheriff’s Deputies continued patrolling the area for the suspect, Travis Crum, and the involved vehicle.  On March 23 at about 10:17 PM residents reported a subject matching Crum’s description throwing sticks at passing vehicles on Highway 36 near milepost 18.

Oregon State Police and Lane County Deputies were dispatched to the call.  About 15 minutes later the first arriving Trooper located Travis William Crum standing in the middle of Highway 36 and he was subsequently taken into custody without incident. Crum is currently lodged at the Lane County Jail on murder charges.

The Lane County Sheriff’s Office is still attempting to locate a 2004 Dodge Caravan that is gold in color with Oregon license plates “975 ESN”.   This van may have blue tape on the hood and fenders.  There is no ongoing threat to the community as Travis Crum is believed to have acted alone in killing Stephen Perry Bream.  If the involved van is observed, please contact the Lane County Sheriff’s Office at 541-682-4150.

This case has been referred to the Lane County District Attorney’s Office. 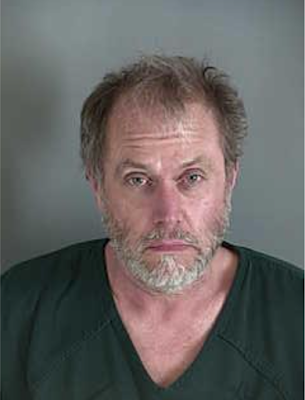