On 4/25/21 at approximately 0930 hours, Officers from the Grants Pass Department of Public Safety responded to 2152 NE Spalding Avenue for a reported burglary in progress.  Victims reported two males had entered the hemp drying facility and were taking items later valued at over $20,000.  When confronted, the suspects drove their vehicle at the victim in an effort to escape with the stolen property.  The suspects then exited the vehicle and fled on foot.  The passenger of the vehicle was able to escape the building while the driver of the vehicle ran to the other side of the facility and concealed himself under hemp trimmings.

Officers arrived at the scene and locked down the facility.  Additional units continued to search the area with the assistance of the Josephine County Sheriff's Department.  Officers at the facility gave numerous commands into the area of the building the suspect was last seen, ordering him to surrender, but he refused to comply.  Due to the suspect remaining concealed and not knowing if he possessed a weapon or was lying in wait for officers, a K-9 unit was called to the scene.

Additional commands were given to the concealed suspect who did not respond.  After a brief search, the suspect was located and apprehended by K-9 Brock.  The suspect was taken into custody and identified as 59-year-old Jeffrey Charles Waegner.  Waegner was provided medical treatment prior to being lodged at the Josephine County Jail on the following charges:

While Officers were searching for the second suspect, GPDPS received a call from alert citizens at Edgewater Christian Fellowship indicating a subject matching the description of the outstanding male had entered ther facility.  Officers contacted the subject at the church who was determined to not be involved. 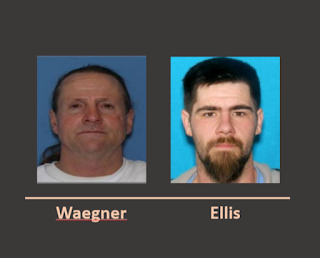