Shortly after 9 a.m. on Sunday May 30, 2021 Clackamas County Sheriff's Office Search & Rescue (SAR) Coordinators learned of a climbing accident near the Old Chute on Mt. Hood.

Witnesses called 911 to report a climber had fallen an estimated 500 feet. The 63-year-old male subject had reportedly been descending Mt. Hood with his adult son on the popular Old Chute route, at approximately 10,500' elevation, when he fell.

A member of PMR and a member of the Crag Rats happened to be recreating on Mt. Hood when they learned of the accident; the two SAR volunteers immediately started making their way to the accident scene to assist with rescue efforts.

Teams from PMR, the Crag Rats, and AMR navigated difficult terrain and hazards posed by hydrogen sulfide and other toxic gases venting from fumaroles along the route as they made their way to the accident scene.

Upon reaching the climber, rescuers found the subject deceased.

The mission then became a recovery mission. Teams loaded the body onto a skiable rescue litter basket, and at 4:20 p.m. they began making their way down the mountain to Timberline Lodge.

The climber's name will not be released at this time, pending family notifications.

This is an unusually busy weekend for climbing on Mt. Hood. The road to Timberline Lodge was closed early Sunday after the parking lot was filled to capacity at approximately 6 a.m.

Portland Mountain Rescue offered a safety message for those climbing the mountain this weekend: Warm weather at this time of year can create very unstable conditions on this area of Mt. Hood, including falling ice. The addition of many climbers of varying skill levels can add additional hazards. Exercise caution while climbing Mt. Hood this weekend. 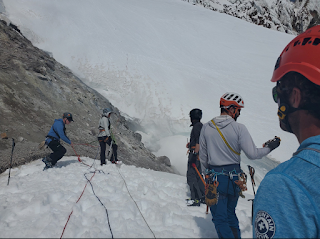 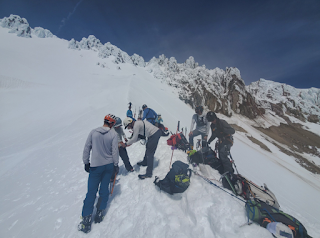