ONE RESCUED FROM THE MCKENZIE RIVER AFTER A MISHAP

Springfield, OR.  Eugene Springfield Fire water rescue crews responded for a person in distress following a tubing incident on the McKenzie River in Springfield Saturday evening.  Initial reports were that 3 people had become trapped on a log (strainer) in the middle of the river behind RiverBend Hospital.  Arriving crews found one person still needing assistance and used Boat 5 staffed with a crew from the Gateway Station.  Eugene Springfield Fire urges citizens to take extra precautions when floating the river this year as debris from the Holiday Farm Fire has increased the number of river hazards.  Trees and branches can deadly when combined with hydraulic forces in a flowing river.  Wear life vests, don't float on uncertified floatation devices and don't float waterways you are not familiar with. 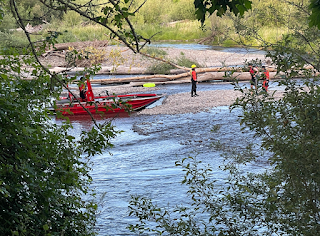