Eugene, OR.  Eugene in Springfield Fire crews responded to a reported RV fire in the 3700 block of Dove Lane in West Eugene Friday afternoon. Arriving Crews found a travel trailer fully involved with fire. Occupants were able to escape the fire but two dogs were missing.  Crews extinguished the fire and found the missing dogs had perished in the fire.  The cause is under investigation. 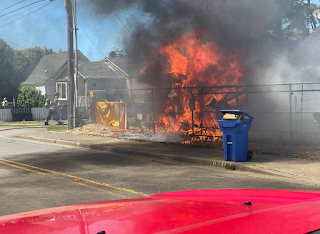